When Mazda announced it would release two concept cars at the Tokyo Motor Show, motoring experts and enthusiasts around the world speculated about the design direction. Expectations of an evolution were exceeded when the VISION COUPE was unveiled in Japan on October 25.

With a respectful nod to its heritage, the VISION COUPE pays homage to the classics that defined Mazda elegance; the 1960 Mazda R360 Coupe and the 1969 Mazda Luce Rotary Coupe. True to Mazda’s KODO: Soul of Motion design philosophy, the VISION COUPE captures the energy and vitality of a living creature, creating a car that looks and feels truly alive.

Maintaining the ‘golden ratio’ of classic coupe proportions, the VISION COUPE has the silhouette of a high-performance machine, with a ‘less is more’ aesthetic.

Built and finessed by hand, craftsmen shaped the bodywork with a focus on the interplay of light and shade, to further evoke a sense of movement. 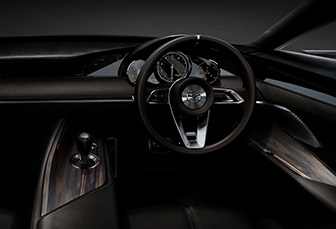 Interior of the Vision Coupe Concept.

The interior is inspired by the traditional Japanese architecture concept ‘ma’, which literally translates to space, to create a feeling of connection with the outside world. Key structural forms, such as the centre console, door trim and instrument panel, intersect without touching, while a see-through display screen functions only when required, to allow for optimum visibility for the driver.

Ikuo Maeda, Managing Executive Officer in charge of Design and Brand Style at Mazda Motor Corporation, said that the VISION CONCEPT demonstrates Mazda’s desire to bring out the special beauty of cars, which retain an intimate position in the lives of their drivers.

“The car we have in mind is the kind of car that can only come from Mazda, a brand embodying the emphasis that Japanese culture places on the bond between human beings and the tools they use. Creating cars that can do this is the challenge that drives Mazda Design,” said Maeda.